JBL are new to gaming and they’ve launched a brand new range of gaming headsets. The one we’re concentrating on today is the JBL Quantum One, a wired headset that features not only 7.1 simulated sound, but also active noise cancellation and spatial awareness, depending on the gaming hardware you plug it into

There’s no hiding the fact that the JBL Quantum One gaming headset is a huge set of headphones. They’re absolutely units. And to keep the weight down JBL has decided to make this headset majority out of plastic. This to me, unfortunately, hinders its premium flagship type feel. I thought I would have liked to have seen a bit more metal, especially around the hinges. There is though a metal rod that runs through the headband which will protect it from snaps if you accidentally bend it too far in the wrong direction. But, being plastic, it means it’s kept the weight down significantly, and the added padding around the headband, and the fact the earcups are like two massive pillows for the over-ear feel, wearing this headset for long periods of time has been no problem at all.

To really take advantage though of the QuantumSPHERE 360 as they’re touting it, you have to run a calibration which requires you to put an earbud microphone into each ear and run a series of tests. It doesn’t take long at all, under the 10-minute mark, but it definitely helped with my audio quality inside of games. If I was listening to music though, it made the audio sound very tinny, which is to be expected in some ways. Things like footsteps, glass breaking, clip reloading, patching your wounds all fall within the mids and treble range. So it makes sense that the left side of the equaliser is heightened, as these are useful cues inside of games to know where the enemies are. 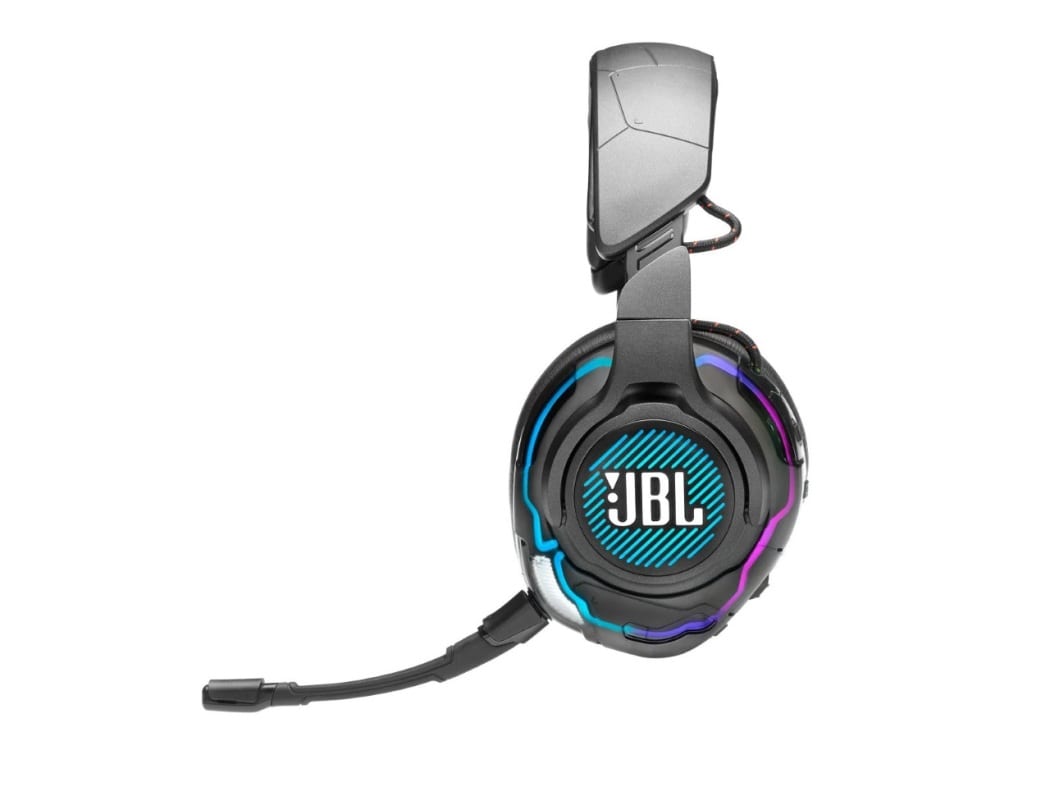 The JBL Quantum 800 is an over-ear headset, capable of connecting to pretty much anything ever designed to have audio come out of it. You’ve got a USB-A 2.4Ghz wireless dongle that works across PC, PS4, PS5, Switch, and Mac, while its 3.5mm connection mops up everything else from Xbox Series X through to Google’s Stadia. If that’s not quite enough, it also has Bluetooth 5.0 meaning you can hook them up to your phone as well. The JBL Quantum 800 wants to be your only headset, and its connectivity means it might just manage it. 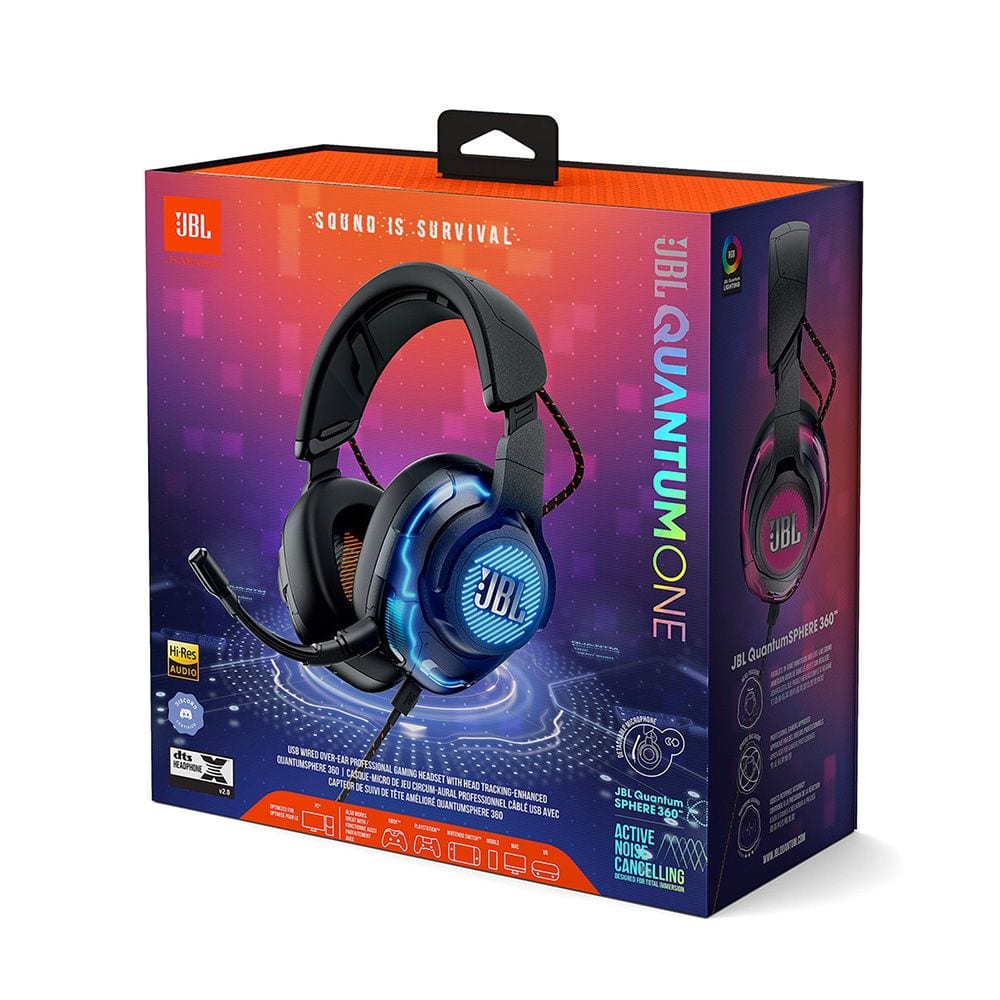 It certainly looks like a modern gaming headset, having been forged from a mixture of all-black matte and gloss plastics, with some highlights provided by its exposed black and orange wiring. Comfort is provided by leatherette-covered memory foam beneath the headband and across the thick earpads.

So, to give you a rundown of specs:

So the specs are pretty impressive, and in turn produce some wonderful audio quality, that we’re going to be going into. Everything runs through the JBL Quantum One driver, which downloads automatically for install when you first plug the Quantum One into your PC, and the setup is fairly simple too.

The Quantum 800 puts plenty of control at your fingertips, with each earcup housing a set of controls. The right-hand side features the power switch, as well as the Bluetooth toggle for pairing. The left meanwhile hosts a pair of dials, one for the volume and one for the game/chat mix, as well as a button to activate the ANC and a mic-muting button. The last one is slightly redundant since the mic sits at the end of a flip-up mic arm, and mutes itself when you flip it up, but if you’re the sort that wants to see their mic and know it’s off, well, the option’s there.

The mic does a great job as well, coming in with Discord, Teamspeak and Skype certification. Other than the easily-lost furry mic shield, it’s exactly what you need when you’re heading online to chat to friends and enemies alike. 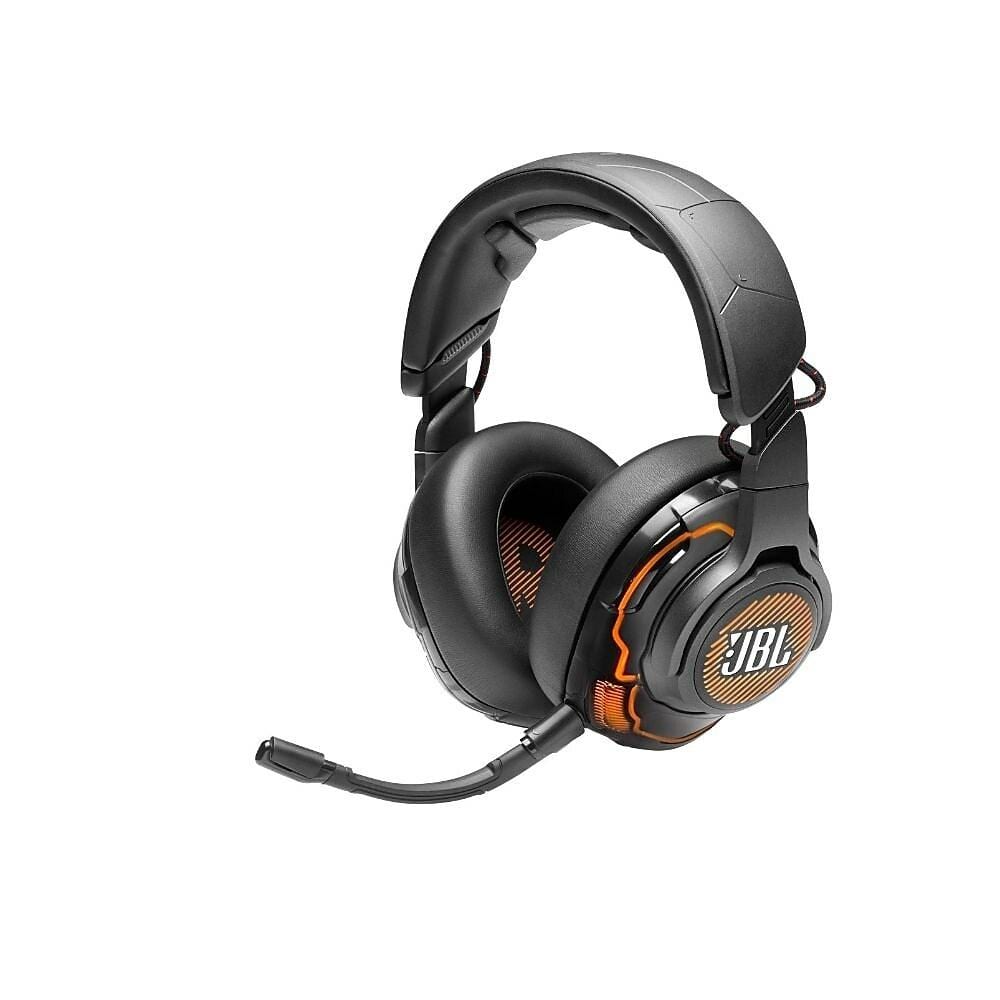 You can play these headphones in 7.1 channel mode. The JBL software takes you to a video to demonstrate how to make the appropriate settings in Windows. I played around with the software’s own Channel ID feature and my own 5.1 channel surround sound clips. I found the locations of sound around the back of my head a little vague, but there was a definite sense of surround sound. The JBL system was more effective in this regard than DTS. All settings delivered the LFE channel properly.

One other feature of the QuantumSPHERE 360 mode is head tracking. That is, the headset can track your head movements and adjust the “direction” of the sound to match.

Imagine: in the real world, if someone’s talking directly in front of you and you move your head to the left, that person’s voice will move to the right in your sound field. You can switch that effect on in the JBL Quantum One headphones. It even worked with stereo music, the sound moving across the acoustic stage as moved my head from one side to the other.

The Quantum 800 are undoubtedly a premium headset – you can tell that the moment you take them out of the box – but their £179.99 price-point is surprisingly realistic given what you’re getting. They boast far more connection options than the Astro A50 and have an audio response akin to the Steelseries Arctis Pro, while undercutting both by at least £100.

Leader in STEAM learning introduces a way to compose code and use the wo ...

It goes without saying that the Alien franchise is one of the finest lin ...