The 2019 Honda CR-V packs a host of high-tech equipment, unrivalled fuel economy, and copious boot space. As if that’s not enough, it also boasts contemporary styling and safe road manners. Yes, the Honda CR-V ticks all the boxes for what constitutes an excellent crossover. Add two fuel-efficient powertrains, including a responsive turbocharged engine, and you'll be hard-pressed to find a fault. The 2019 CR-V has the stats to be the best MPV out there on the road!

The CR-V presents a gorgeous look for Honda, one that is modern and stylish. The iconic Honda family grill, chromed so that you can’t miss it, and pugnacious front bumper give the car a determined appearance, while the kinked edges of the hood add extra visual pizazz. Wrapping into the sides, these styling elements draw the eye to a tidy tail that looks a little bit sporty and a little bit upscale.

My test vehicle had a charcoal leather interior, which not only seamlessly integrated with the CR-V’s black dashboard but also made the front of the interior seem bigger than it is. So equipped, the CR-V Touring’s cabin possesses an upscale look and feel, even if at the same time evidence of the SUV’s affordable base price is apparent.

The CR-V’s driver’s seat is the premier one of the house, thanks to 12-way power adjustment, good bolstering and cushioning, and a heated cushion. The front passenger’s seat mirrors these qualities but is limited to 4-way adjustment. Because the seat is mounted fairly low, this results in an uncomfortable and unflattering splayed leg seating position.

In the rear, there’s generous room for two, and even three can ride in the back with ample room. in-fact, riding in the back was my preferred choice, as a 6’3″ guy I could easily stretch my legs and relax.

With two knobs and clearly marked buttons, the CR-V’s dual-zone automatic climate control system is simple to use, and effective at warding off the chill on cold, rainy days.

The touch-screen menus have small graphics that require too much of your attention to use with precision while you’re driving. It seamlessly works with Android Auto and CarPlay, however the tiny screen and millions of buttons let it down unless you only use it as a slave screen for your phone. 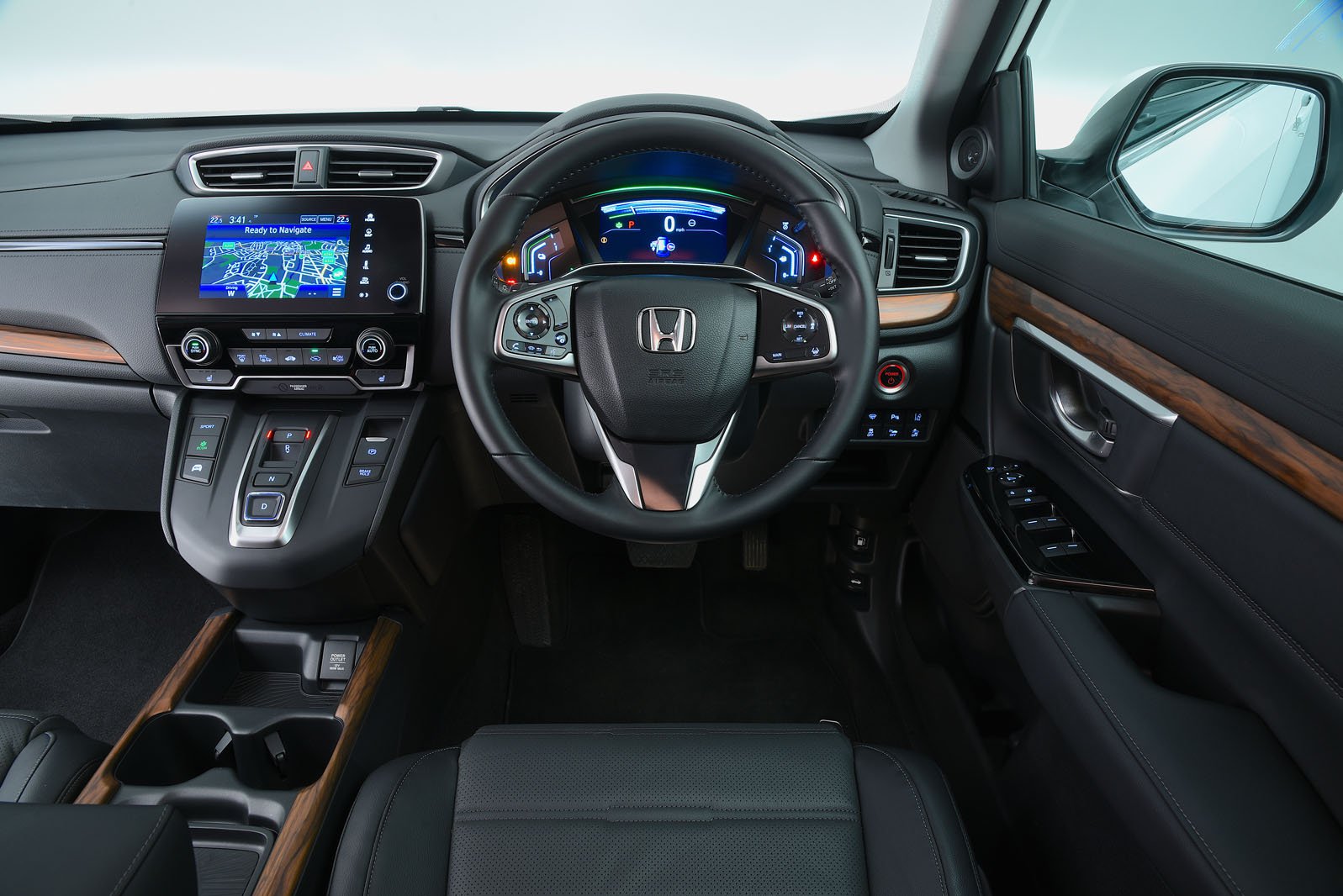 Go ahead, bring it. The Honda CR-V makes it easy to organize your belongings, with plenty of room in the center console and glove box, along with useful little bins around the cabin. The door bins are generous and useful too.

With the rear seats in use, you’ll have 39.2 cu. ft. of cargo space. Fold them down and you’ll get 75.8 cu. ft., which is one of the biggest measurements in the compact crossover segment and is in fact similar to what many midsize SUVs supply.

The CR-V’s driver’s seat offers a good vantage point from which to look out over the sloping hood. Thick roof pillars will, however, make you glad that you have a blind-spot monitoring system with rear cross-traffic alert, which comes standard on the EX trim level and above.

Honda is a leader in making advanced safety technology available to the masses, and as such, the Honda Sensing suite of active safety features is standard on all CR-Vs except for the base LX trim level.

This includes adaptive cruise control, forward-collision warning with automatic emergency braking, lane-departure warning with lane-keeping assist, and a road departure mitigation system. You’ll also have to step up to the EX trim level to get a blind-spot monitoring system with rear cross-traffic alert.

The CR-V proves stellar when it comes to protecting its passengers in a crash, with the Insurance Institute for Highway Safety (IIHS) deeming it a “Top Safety Pick.” The only reason it missed a “Top Safety Pick+” rating is due to an “Acceptable” performance for its headlights.

The standard for CR-Vs with EX trim and higher, a 1.5-litre, the turbocharged 4-cylinder engine makes 190 horsepower and 179 lb.-ft. or torque. It makes the CR-V feel lively and quick to get up to speed, although it tends to be loud under hard acceleration. A continuously variable transmission (CVT) delivers power to the front wheels unless you opt for Honda’s Real-Time 4WD system, which can send up to 40% of the power to the rear wheels for extra traction, according to Honda.

The EPA says that the CR-V with AWD should return about 29 mpg in combined driving. My test vehicle came close, returning 27.7 mpg on a test loop of mixed driving conditions. I’m not really sure why fuel economy caused consternation for so many owners that it would be cited as their least favourite attribute, but I was pretty pleased with my test vehicle’s mileage.

Owners of the Honda CR-V love its driving dynamics, citing this as a favourite feature. Certainly, this vehicle puts a smile on a driver’s face with its assured nature when diving into corners and engaging handling characteristics regardless of the situation.

In particular, the steering is nice and light around town for twirling the CR-V into parking spaces, but gets a little heftier at higher speeds where you want a resolute on-centre feel. The brakes prove predictable, too. But the star here is the suspension tuning, which delivers a communicative yet compliant ride combined with confidence-inspiring handling. In part, you can thank the tried-and-true rear multi-link double-wishbone design.

Practically speaking, the CR-V’s tidy exterior dimensions make it easy to slip into and out of holes in traffic while zipping around on city streets. This manoeuvrability, combined with a just-right size for many families, no doubt helps the CR-V to win the compact crossover popularity contest.

You see so many Honda CR-Vs on the highways and driveways of America today, and the reasons are perfectly clear. Honda hits all the right notes with this friendly and versatile vehicle. It’s safe, dependable, fun to drive, and roomy enough for your small family and their gear.

If you’re looking for an all-purpose vehicle without compromising on style and fuel economy, the 2019 Honda CR-V is the one.

Quality is inherent in some brands and when it comes to audio accessorie ...

Imagine, if you will, a tastefully furnished, laconic New York studio ap ...

Read more
News
ONE IN FIVE BRITS FEELS COMPLETELY OUT OF CONTROL OF THEIR LIFE, ACCORDING

One in five Brits feels their life is spiralling out of control, accordi ...