The Converse x Foot Patrol ‘Jack Purcell & CT 70 High’ Sneakers are a new release of two different offerings and they will both appeal for different reasons.

The Converse x Foot Patrol ‘Jack Purcell & CT 70 High’ Sneakers are hitting shelves soon and this limited edition offering likely won’t be remaining there for long so you’ll need to move fast if you like what you see. The Converse Chuck Taylor is one of the most universal shoes of all time, and it can be easy to overlook the shoe’s humble beginnings but this collaboration aims to celebrate the origin story.

Originally starting out as a rubber manufacturer, Converse quickly turned their sights to the sporting world and began producing footwear for athletes. In 1922 the classic high top silhouette caught the attention of semi-pro basketball player, Charles ‘Chuck’ Taylor, who approached Converse with a few design ideas. After a rapid redesign (which included adding Taylor’s signature to the heel-tab), the Chuck Taylor was ready to hit the courts and this collaboration from Converse and Foot Patrol is a celebration of where it all began. 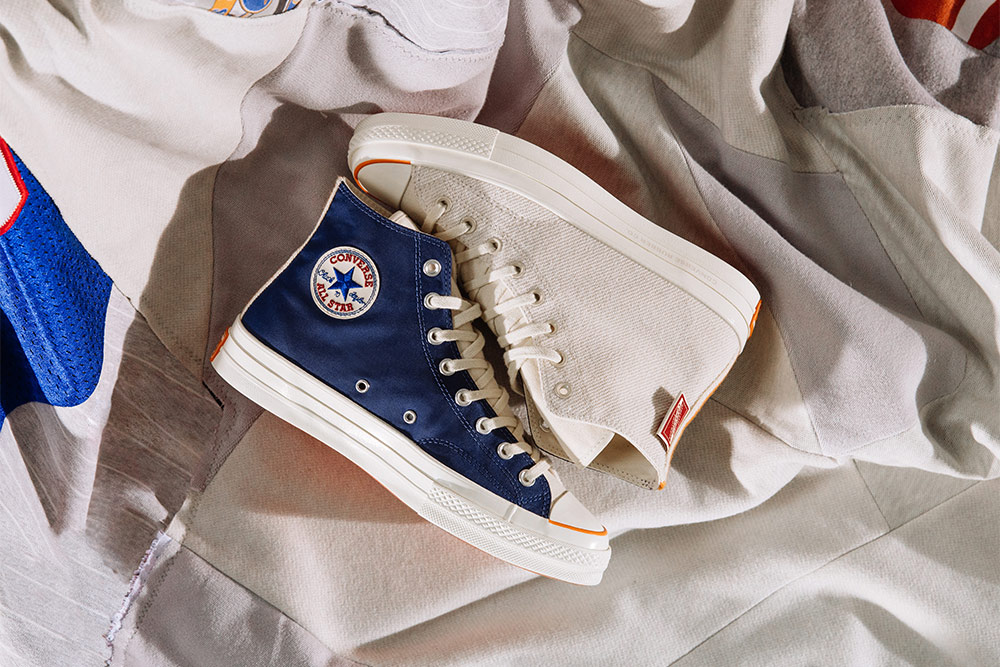 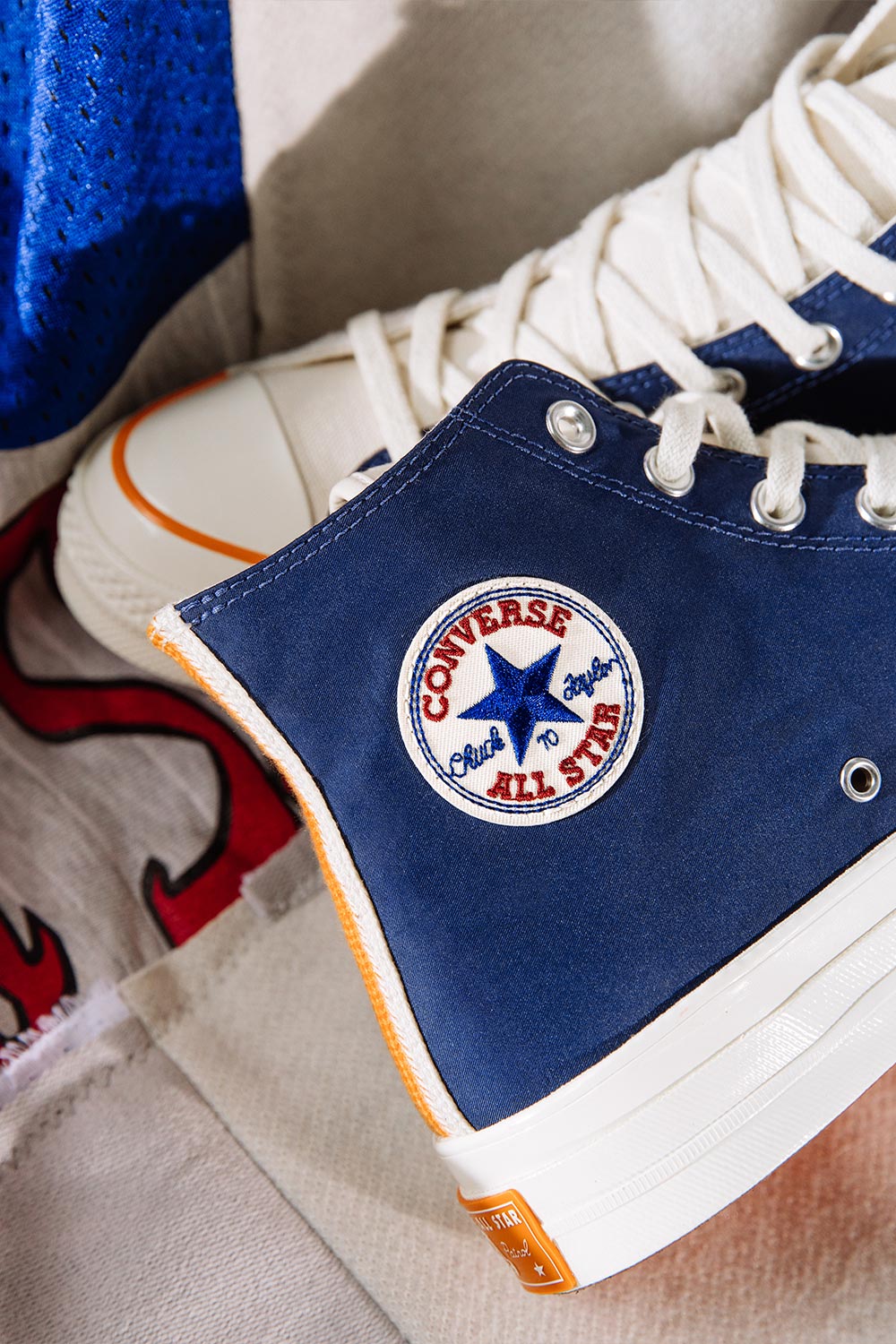 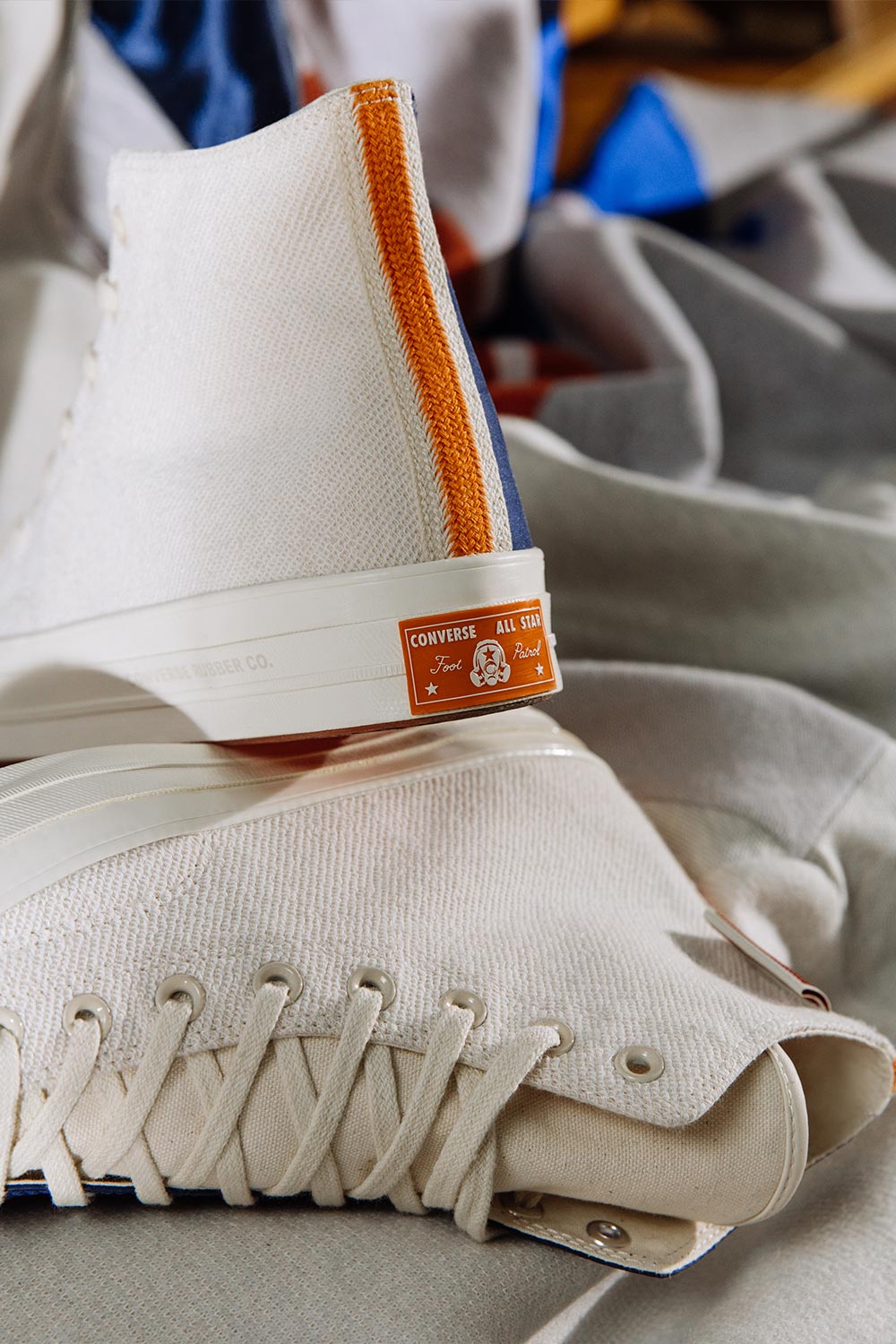 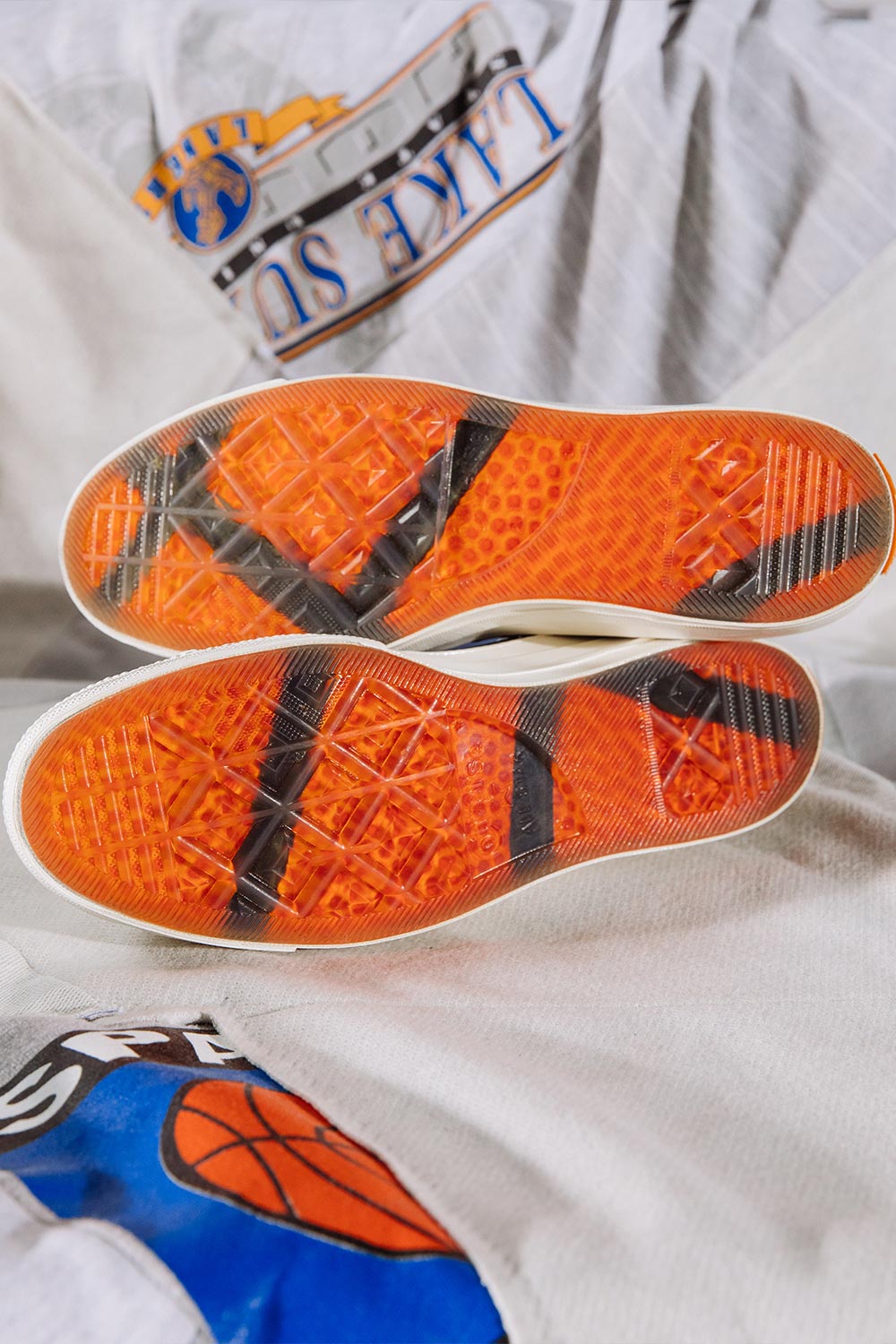 The Converse x Foot Patrol ‘Jack Purcell & CT 70 High’ Sneakers are a celebration of how Converse and Taylor went around America to schools, colleges and gyms teaching people the fundamentals of basketball. Converse soon became synonymous with the sport, however over time they began to transcend this perception and speak to a much more mainstream audience. Converse began to represent Americana and personify the collegiate background it came from, influencing generations to come. 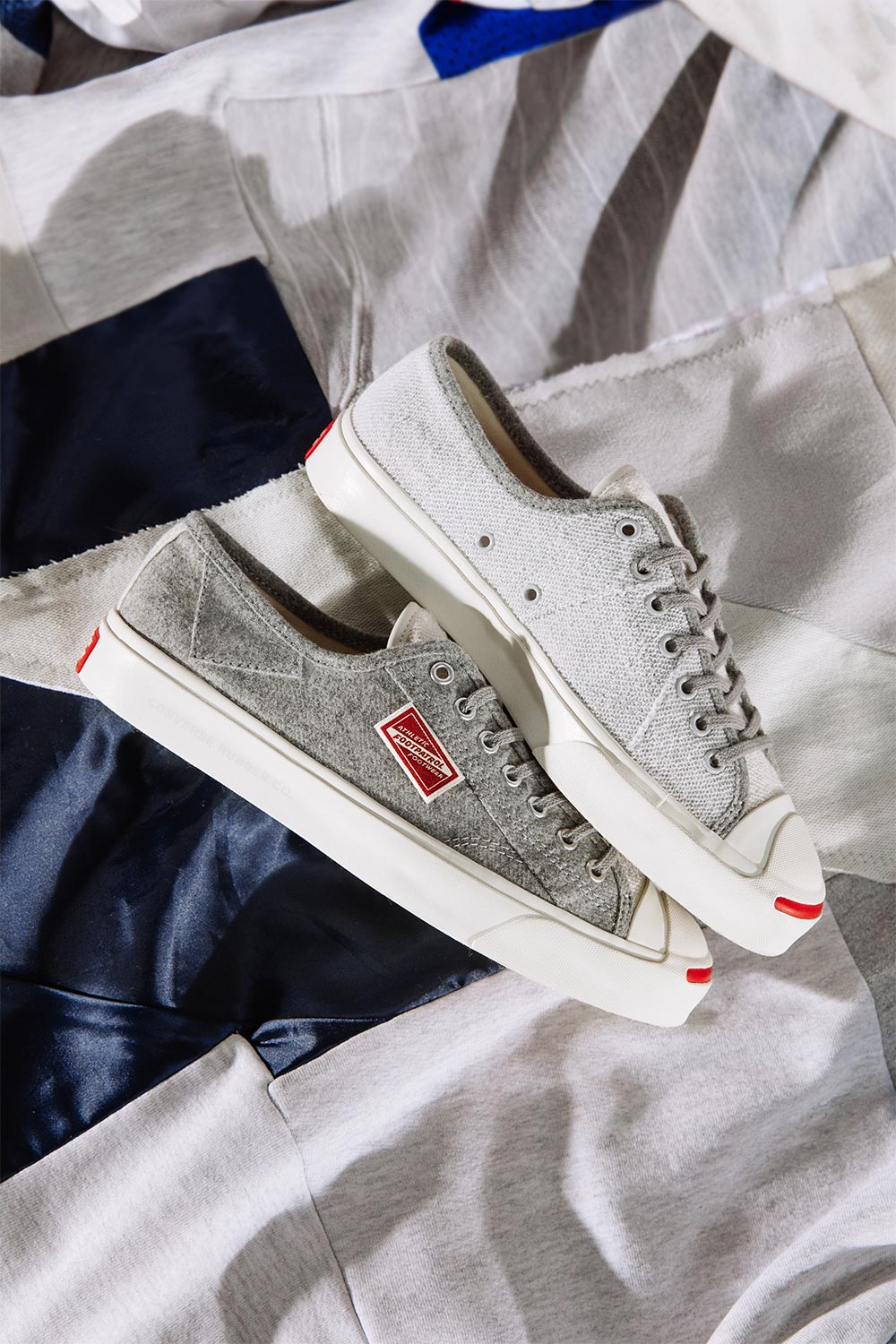 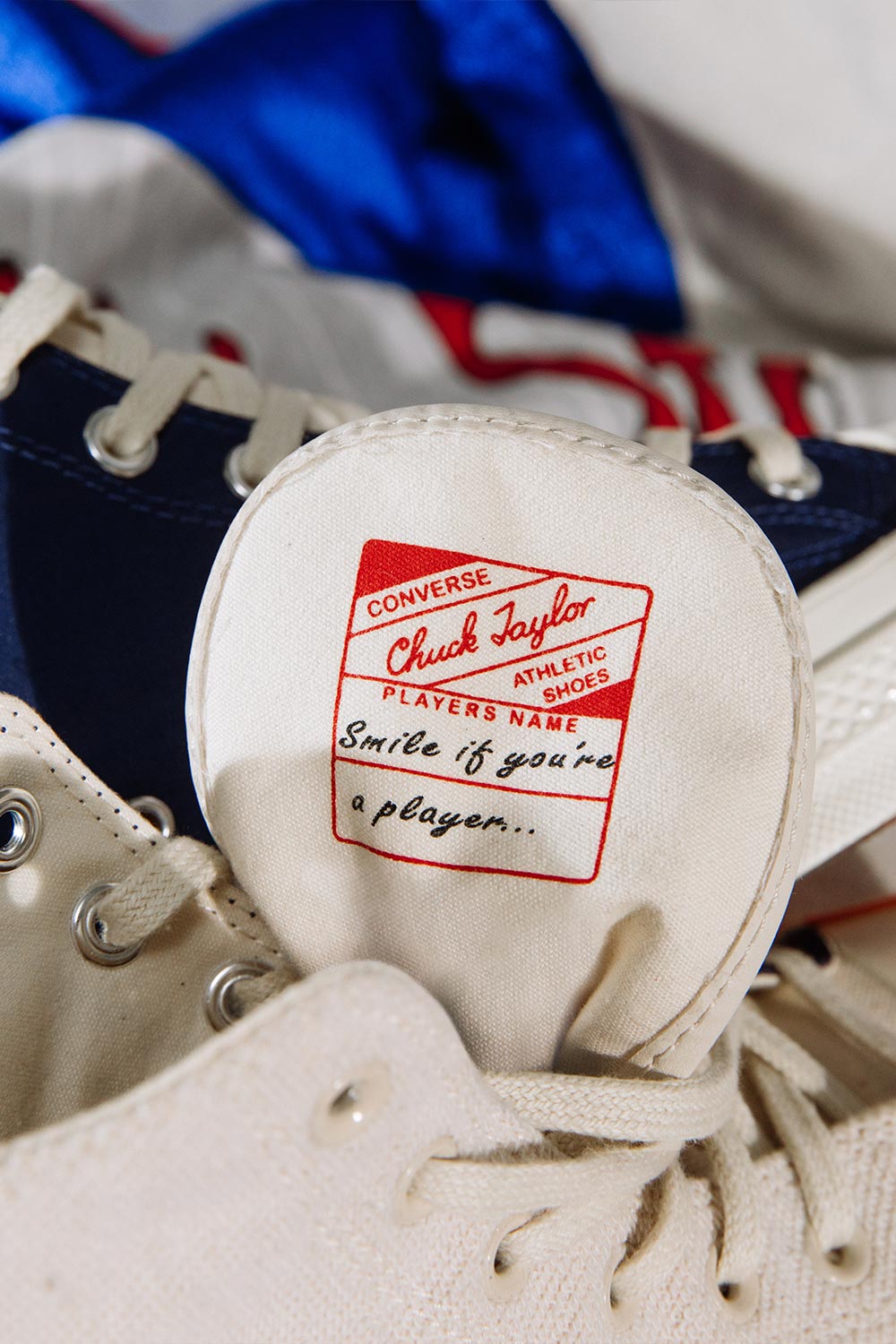 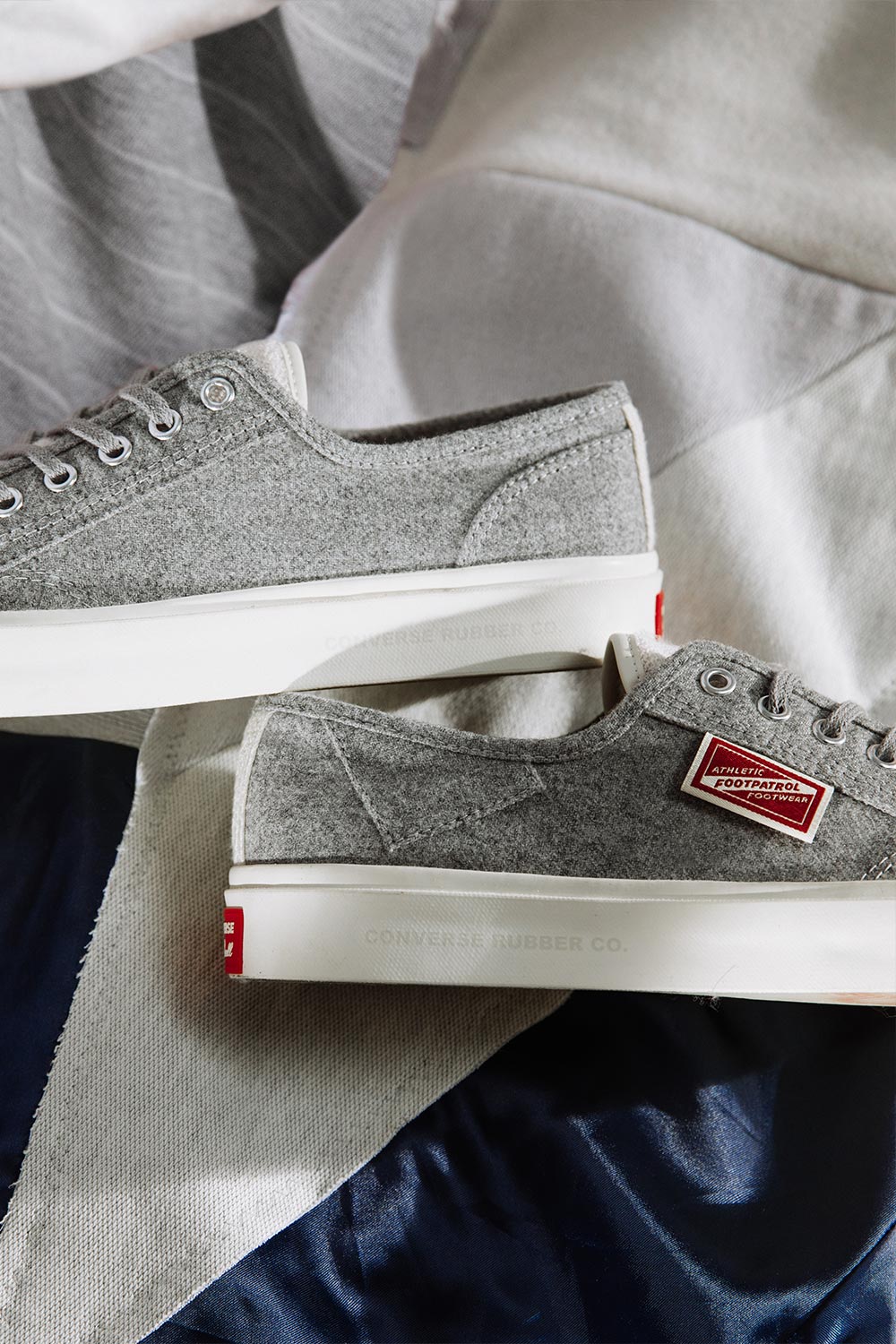 This fantastic new collaboration release with Foot Patrol is constructed with an asymmetrical loopback fleece and satin panelled upper, to reflect the look of sportswear warm up apparel. The silver eyelets are a nod to the popper fastenings found on coach jackets and other details such as the ‘Converse Rubber Shoe Co’ branding on the heel, embroidered Converse badge and co-branded heal label, are all throwbacks to vintage Converse models. In this collection they have also included the Converse Jack Purcell model, which was first introduced to the world by a Canadian badminton player of the same name, in 1935.

Everywhere you look with this collaboration release from Converse and Foot Patrol that are great little design details. This includes a leather trim around the tongue which carries on the the varsity theme which pays homage to the leather sleeves opposing the woollen body. The lateral side features a patch overlay as a nod to the construction of a varsity jacket and there is an effortless old school cool to proceedings. 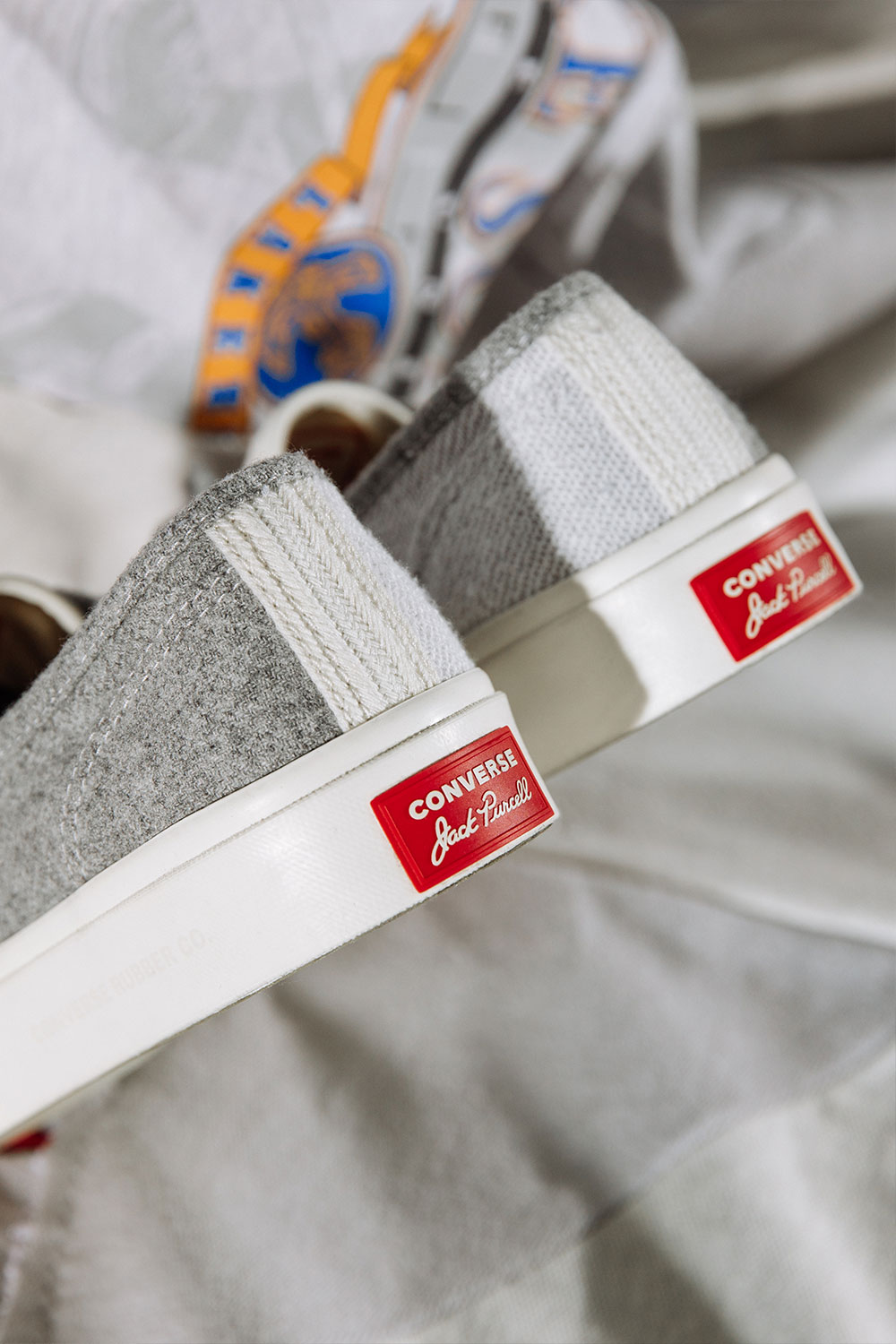 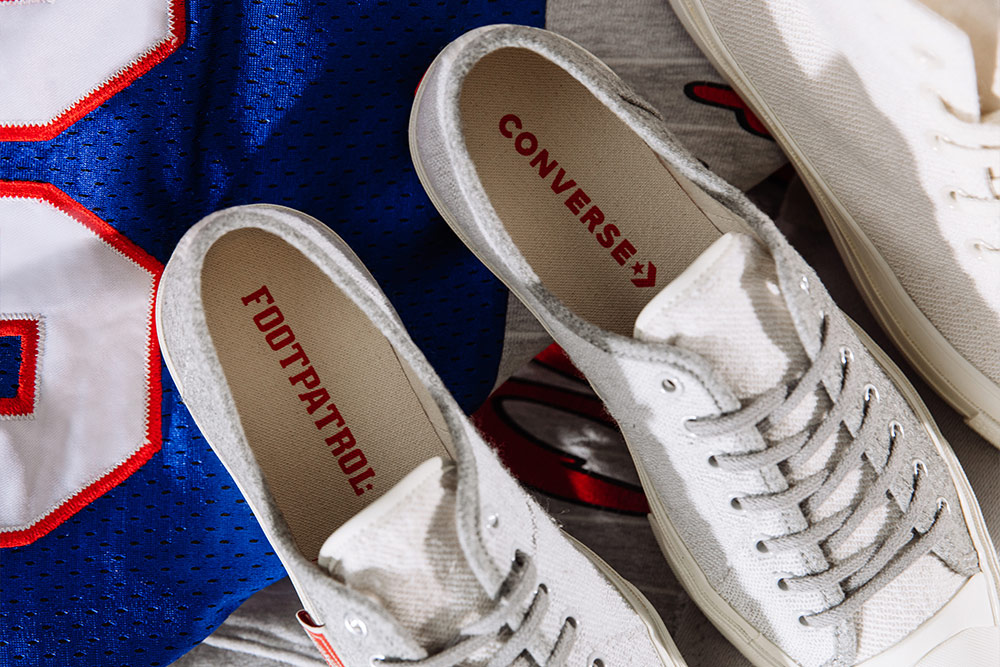 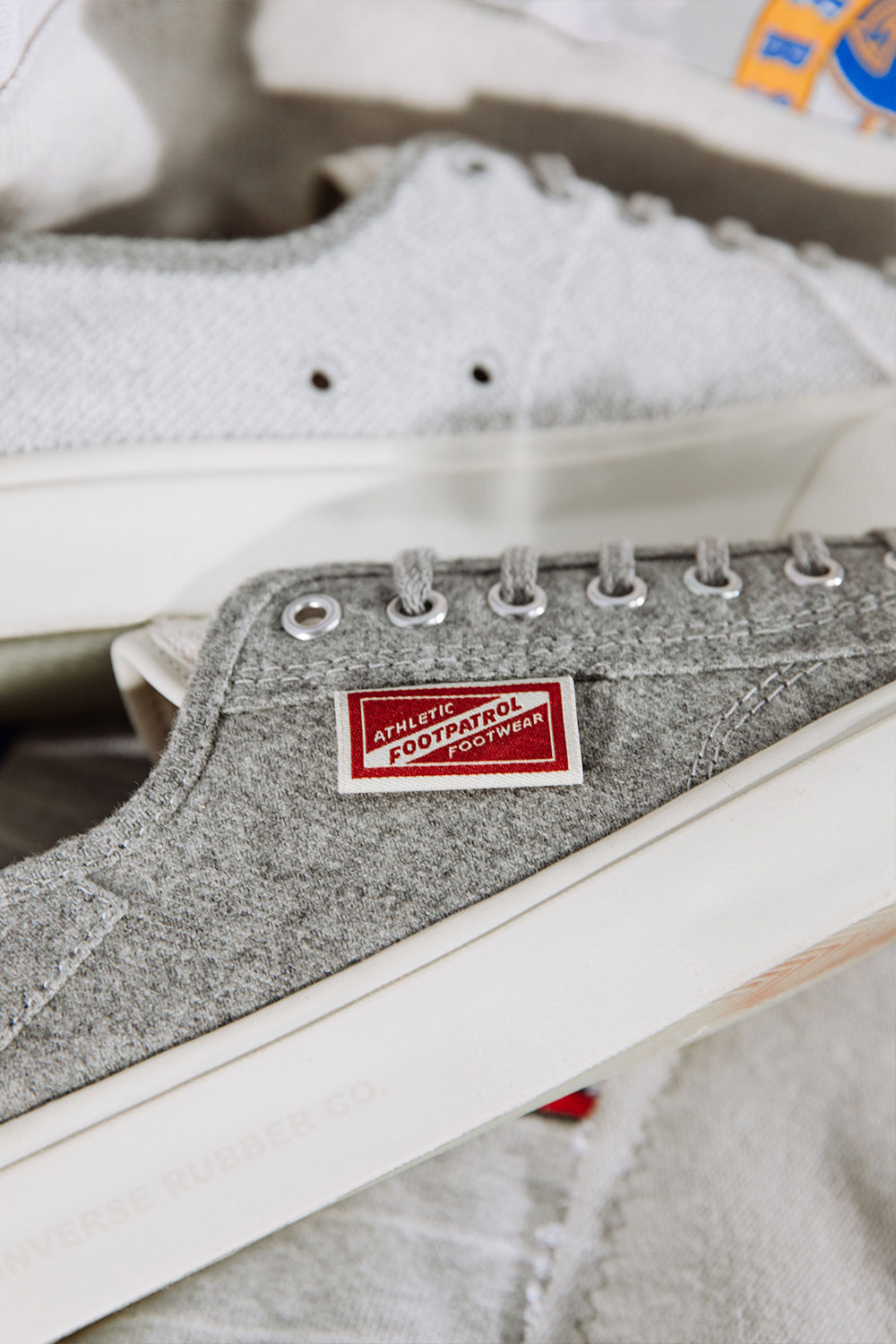 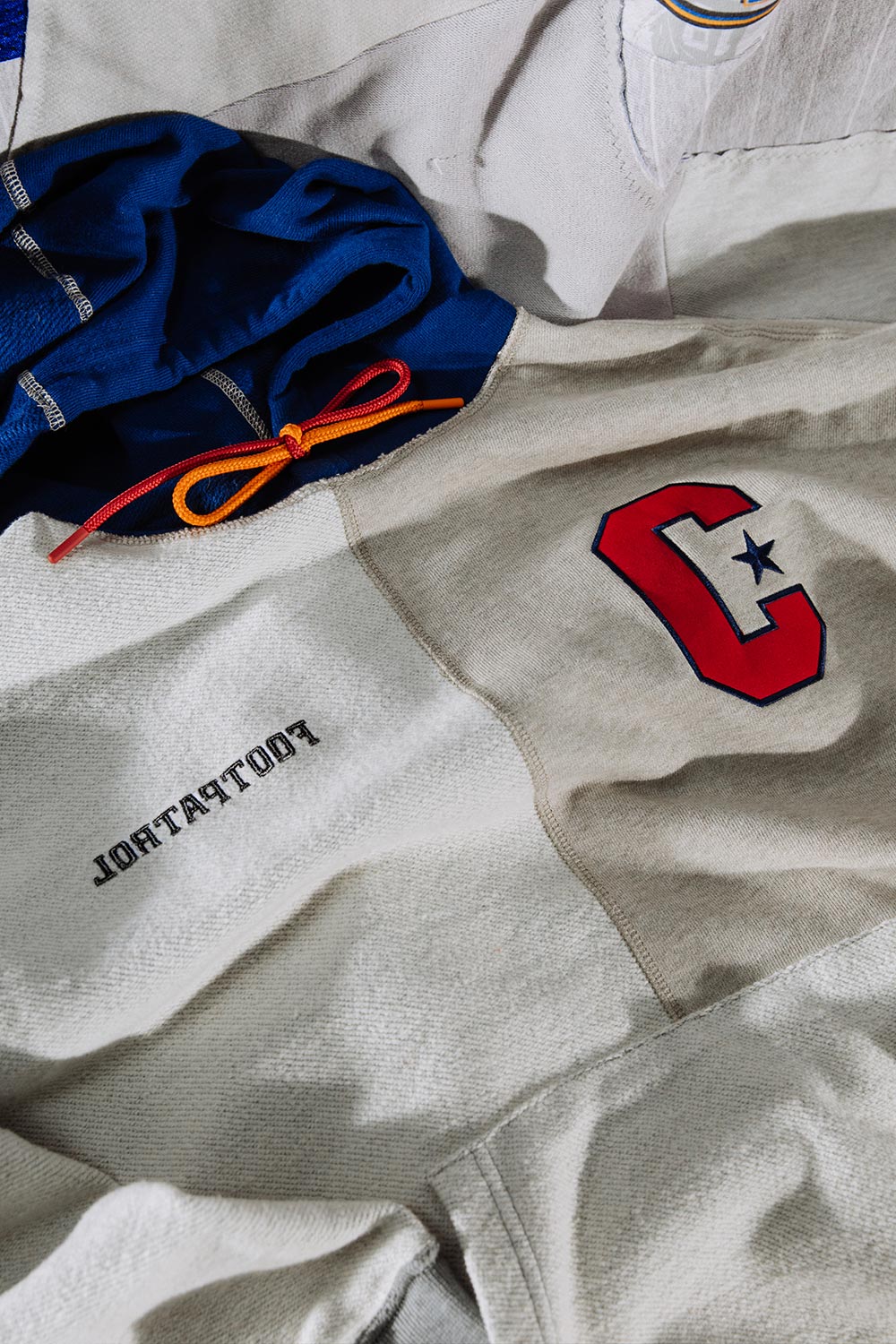 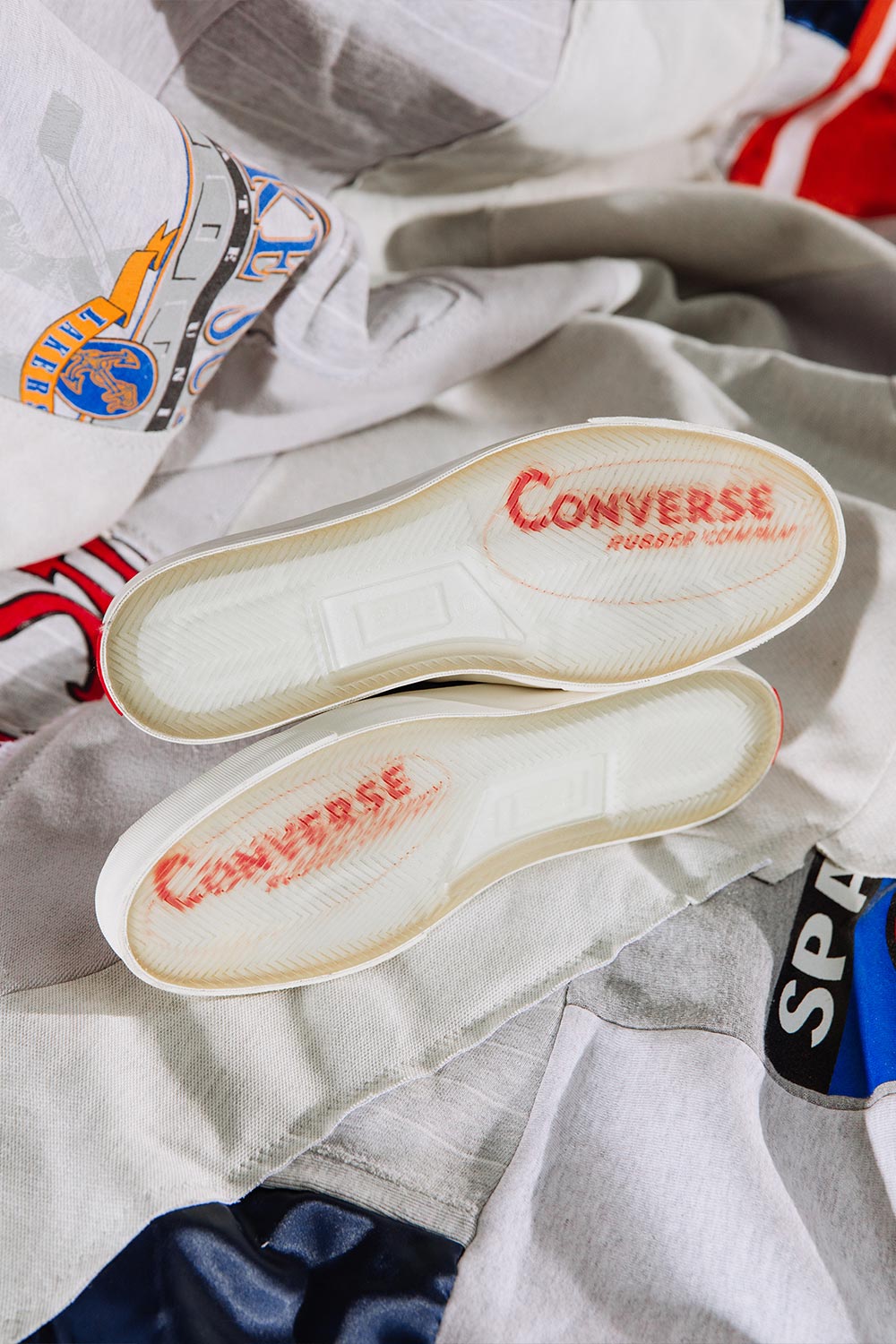 Lexus as today announce first expressions of the LY650 Lexus yacht. The ...

Imagine, if you will, a tastefully furnished, laconic New York studio ap ...

16 million colours controlled by your voice, what's not to like?

Showcasing Its Game-Changing Flexible+ Platform at CES 2019 with Flexibl ...