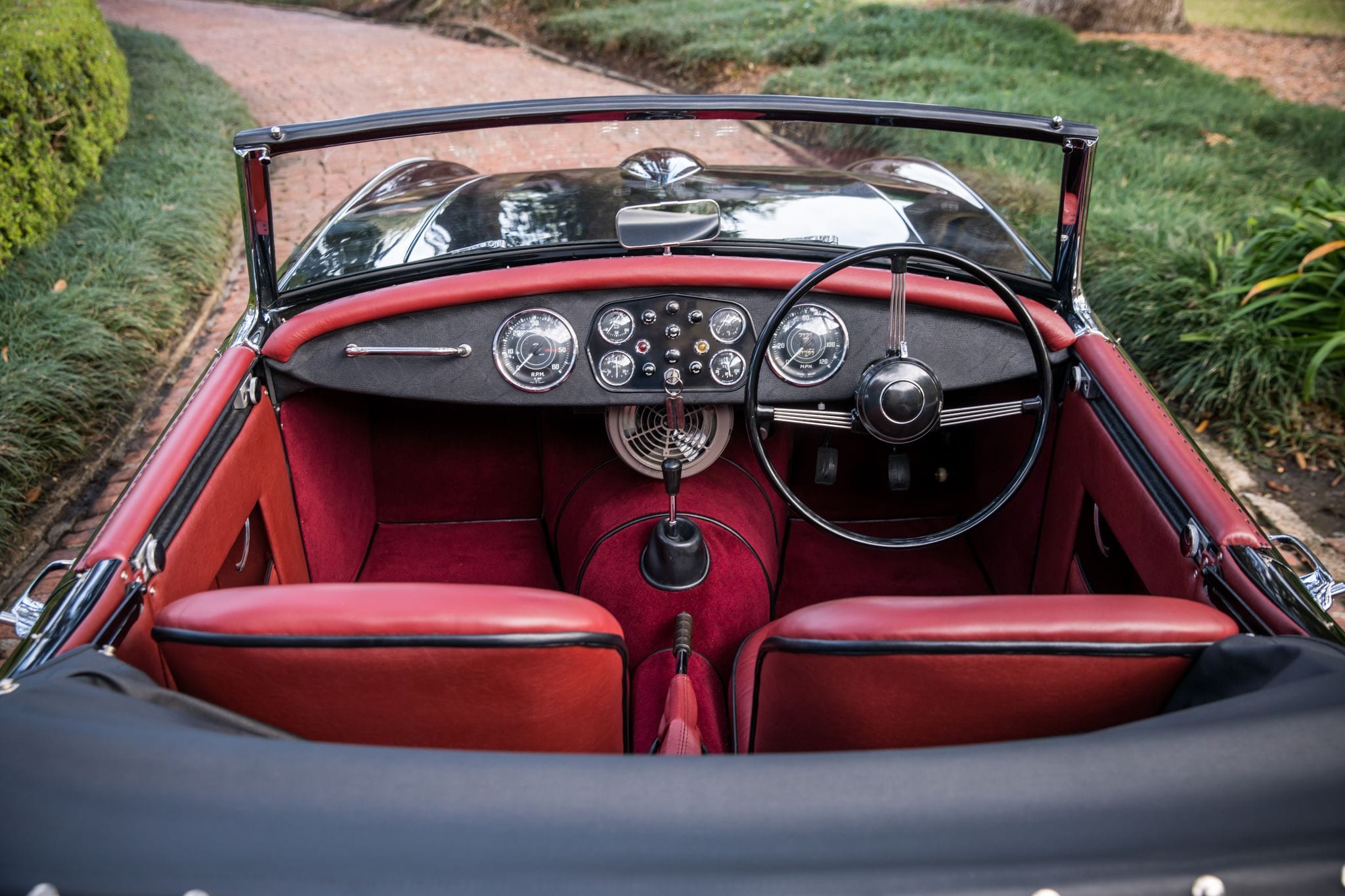 We’ve featured our fair share of classic cars over the last few years but, to our knowledge, never a Doretti (perhaps because it’s the first time we’ve heard of the brand). Well, we’ve changed that with this spectacular little 1954 Swallow Doretti which is going up for sale in RM Sotheby’s Amelia Island auction later this year. It has a very Don Draper-esque vibe to it and that ramps up its cool considerably in our eyes.

This 1954 Swallow Doretti from RM Sotheby’s is being offered without reserve so there is the potential to pick up a bargain if you’re lucky on the day. It has a very mid-century aesthetic which will be sure to resonate with lovers and collectors of classic cars. This striking machine was the 208th of 276 Swallow Doretti sports cars produced from 1954 to 1955 so, if you’re lucky enough to get your hands on it, you’ll be in pretty exclusive company.

The black over dark red colourway of this 1954 Swallow Doretti gives it a very traditional, classic vibe and it is presented in remarkably good condition given it is nigh on 70 years old. This first class steed from RM Sotheby’s boasts a 2.0-litre inline-four cylinder engine; four-speed manual transmission and comes in right hand drive and was delivered new to Glasgow, Scotland when it rolled off the assembly line all those years ago.

This award winning example of a 1954 Swallow Doretti is sure to get a lot of traction when the bidding opens at RM Sotheby’s Amelia Island auction and we’re in little doubt it will end up as a cornerstone piece for a luxury / classic car collector’s line up of machines. It has benefitted from an frame-off restoration which explains why it is in such an exemplary condition which is likely to see a lot of bidders looking to get it added to their collection.

The Swallow Doretti was produced by The Swallow Coachbuilding Company from 1954 to 1955. Penned by Frank Rainbow, it took its design inspiration from the handsome Italian vehicles of the era such as the majestic Ferrari 166 MM Barchetta. Its Italian-sounding name was thought to assist in the marketing of these new sports cars in the United States, though the running gear was based predominantly on the Triumph TR2. In the Doretti’s short production run, just 276 examples were built so there won’t be a lot of others out there on the open road.

Powered by its original TR2 inline-four-cylinder engine and boasting twin side-draft SU carburetors which have been paired with a four-speed manual transmission, this Doretti is replete with desirable and correct components which help to distinguish it from its Triumph cousin – namely the aluminium bodywork, tubular chassis, unique bumper bolts, Doretti hub caps, rear pebble deflectors, and polished steel cabin sills.

This breathtaking 1954 Swallow Doretti from RM Sotheby’s is accompanied by a history file, tool kit, concours awards, period literature and automobilia, and a photo album documenting the 1999 restoration that it underwent. With so few of these machines ever made, it goes without saying that it will be a popular lot when it goes under the hammer later in the year.

Vietnam is rapidly becoming our favourite home of contemporary architect ...

Looking for a great tasting and totally natural drink to get you through ...

Read more
Life
Autumn Drinks - Taking you through to the end of lockdown 2.0

As Autumn rolls in and as the air starts getting that little bit cooler, ...

Never run out of phone or tablet battery again!